Calibration of the underground muon detector of the Pierre Auger Observatory

Enhanced measurements of muons in air showers will allow improved estimations of the chemical composition of cosmic rays at the Pierre Auger Observatory.

As part of an undergoing upgrade, the underground muon detector (UMD) is being deployed to obtain direct access to the muonic components in air showers produced by cosmic rays with energies between 10^16.5 and 10^18.5 with high statistics. It consists of two triangular grids with 750 m and 433 m spacings, and a total of 73 positions, which works in tandem with the surface detector of the Pierre Auger Observatory by using its triggers. At each position of the array, three 10 m^2 modules are being deployed at 2.3 m underground. Each module consists of 64 scintillator strip of 400 cm X 4 cm X 1 cm with wavelength-shifting optical fibers that conduct the photons produced by impinging particles on the scintillator to an array of 64 silicon photomultipliers (SiPM). In the read-out electronics two acquisition modes are implemented to attain a dynamic range that goes from a few up to few-tens muons per m²: the binary mode, designed to obtain measurements of low particles densities, and in turn, far from the shower core, and the ADC mode, to obtain measurements of a higher number of particles. In the binary mode, an amplitude threshold is implemented, so each SiPM output is translated to a binary trace of "0"s and "1"s, depending on whether the signal is below or above the threshold, respectively. In the ADC mode, the 64 SiPM outputs are summed into a waveform.

Recently, the Pierre Auger Collaboration has presented a paper on the end-to-end calibration of the UMD. For both channels, the ultimate scope of the calibration is the conversion from raw signals to the number of muons. In the binary channel, this is achieved by interpreting sequences of bits in binary traces; in the ADC this is scaling the total charge measured in a UMD module with the mean charge of a single muon.

The first step of the calibration process is to set the operating point of the SiPMs, which is performed using the SiPM thermal noise: the rate of dark counts is measured as a function of the pulse amplitude produced by these at different reverse-bias voltages, Vbias. For each voltage, the mean amplitude of the single photo-equivalent (PE) is determined. We illustrate this procedure in Figure 1, where we show the rate of SiPM dark-counts crossing the binary channel threshold as a function of this threshold value (left panel), and the obtained PE mean amplitude as a function of Vbias (right panel). The PE mean amplitude is proportional to the SIPM gain and becomes 0 when Vbias is equal to the minimum voltage needed to operate the SiPMs in Geiger mode, dubbed, breakdown voltage or Vbr. With this information, we can set Vbias = Vbr + 3.5 V, and the amplitude threshold of the binary channel at 2.5 PE, for the more than 14000 SiPMs in the whole UMD array.

Figure 1: (Left) Dark-counts per second (cps) as a function of the discriminator threshold at different Vbias for an individual SiPM. The dark-count rates and PE amplitudes shift towards higher values when rising the Vbias. In the inset, we show one curve at the middle of the displayed range in the main plot and its derivative fitted with a Gaussian distribution to obtain the corresponding PE amplitude. (Right) Vbr determination for this specific SiPM. The linear extrapolation to 0 amplitude yields the value of Vbr.

We then proceed to fill the calibration histograms to extract the mean charge of the single-muon signal in the ADC channel. To this aim, we use background muons in the field. An algorithm runs in parallel to the module normal acquisition to extract calibration data after each trigger from its associated water-Cherenkov detector of the surface array. When a trigger signal is received, the algorithm looks for a single-muon signature in the binary channel. If this condition is met, which might be fulfilled either by background muons or noise, the signal charge in the ADC channel is computed and stored. To avoid biases in the calibration, we also obtained data from pure noise signals that match the muon selection criteria and fill a noise histogram to subtract it from the previously described. An example of this procedure is presented in Figure 2. 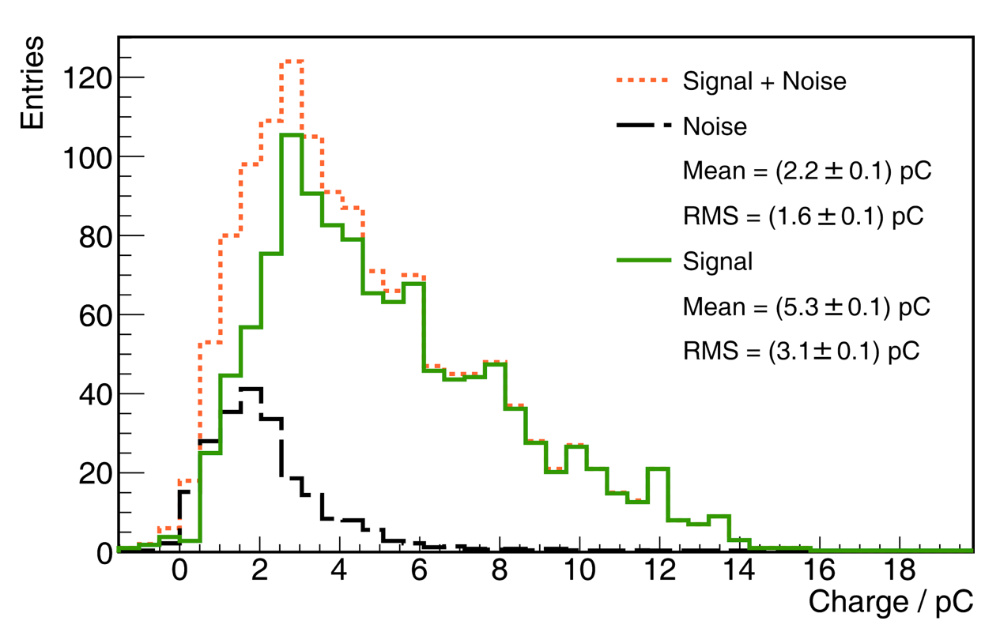 The methods presented were proved to be robust enough to effectively work at the Pierre Auger Observatory site for the 219 modules, and more than 14000 SiPMs of the whole UMD array, that will operate in adverse environmental conditions for several years.

Calibration of the underground muon detector of the Pierre Auger Observatory
The Pierre Auger Collaboration, Accepted for publication in JINST
[arxiv.org/abs/2012.08016]