The Auger Observatory is a "hybrid detector," employing two independent methods to detect and study high-energy cosmic rays. One technique detects high energy particles through their interaction with water placed in surface detector tanks. The other technique tracks the development of air showers by observing ultraviolet light emitted high in the Earth's atmosphere. The hybrid nature of the Pierre Auger Observatory provides for two independent ways to see cosmic rays. These two ways are an array of surface detector stations, and a collection of air fluorescence telescopes. 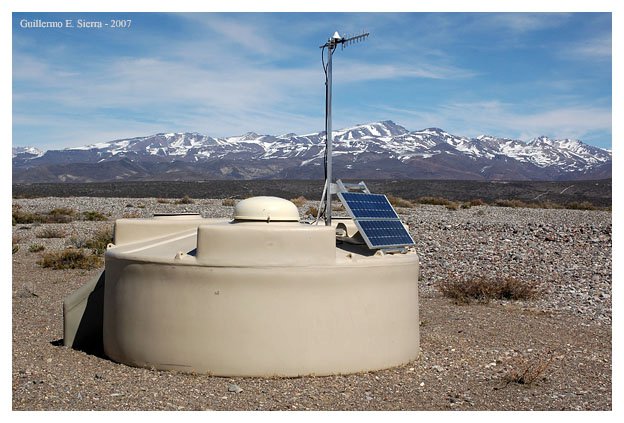 The first detection method uses the Observatory's main visible feature - the 1,660 water surface detector tanks that cover about 3,000 km2 of the Pampa, an area about 30 times the size of Paris, and serve as particle detectors. Each 3,000-gallon (12,000 liter) tank, separated from each of its neighbors by 1.5 kilometers, is completely dark inside - except when particles from a cosmic ray air shower pass through it. These energetic particles are traveling faster than the speed of light in water when they reach the detectors; therefore, their electromagnetic shock waves produce Cherenkov light that can be measured by photomultiplier tubes mounted on the tanks. Extensive air showers contain billions of secondary particles and can cause nearly simultaneous bursts of light in more than five tanks. Scientists can determine the energy of the primary cosmic ray particle based on the amount of light they detect from a sample of secondary particles. Slight differences in the detection times at different tank positions help scientists determine the trajectory of the incoming cosmic ray.

What Is Inside Those Tanks? 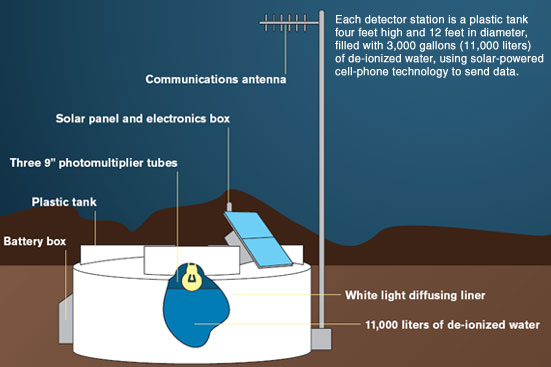 Each one of these plastic tanks is filled with 12 tons of ultra-pure water. When charged particles from a cosmic ray shower zip through the tank, they emit tiny flashes of light which are seen by three very sensitive photomultiplier tubes. These tubes convert light into electrical signals. The source of power is the sun: solar panels are used to charge batteries, which provide all the power the tank needs. Data processing electronics, mounted inside a dome on top of the tank, collects the phototube signals and transmits the processed information via antenna to the main campus. A GPS device provides accurate timing, so that signals from many tanks can be properly compared. 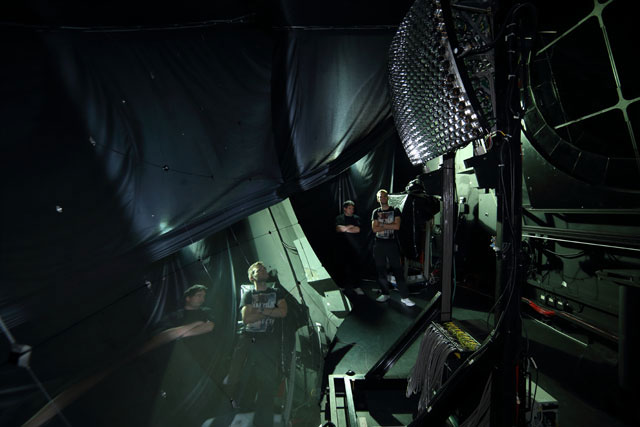 The charged particles in an air shower also interact with atmospheric nitrogen, causing it to emit ultraviolet light via a process called fluorescence, which is invisible to the human eye - but not to the Auger Observatory's optical detectors. The observatory's second detection method uses these detectors to observe the trail of nitrogen fluorescence and track the development of air showers by measuring the brightness of the emitted light. To the fluorescence detectors, a cosmic ray looks like a UV light bulb rocketing through the atmosphere at the speed of light, with an ever-increasing brightness that can reach up to four watts as the cascade grows to its maximum size. Using a grid of focusing mirrors to collect the light, cameras can view the air shower up to 15 kilometers away. The Auger Observatory's fluorescence detectors are much more sensitive than the human eye and can "see" distant air showers develop. Occasionally, a cascade will occur in a place where two fluorescence detectors can record it, which allows for very precise measurements of the direction the cosmic ray came from. 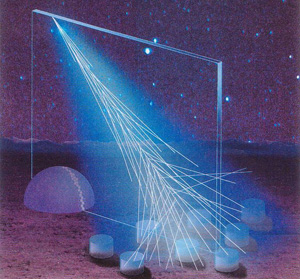 Employing these two complementary observation methods provides the Auger Observatory with high quality information about the types of particles in the primary cosmic rays. Comparing results from the different types of detectors also helps scientists reconcile the two sets of data and produce the most accurate results about the energy of primary cosmic rays. The fluorescence detectors are able to detect the total energy of an air shower, which is approximately equal to the energy of the primary cosmic ray. Total cosmic ray energy is more difficult to determine with the surface detectors, which sample a small fraction of the energy of an air shower. Comparing data from the two methods is similar to comparing the results of a political poll and the results of an actual election, allowing scientists to better understand data from both detection methods and work on increasing the accuracy of both techniques. While the fluorescence detectors only work on clear, moonless nights, the surface detectors are always operating regardless of atmospheric conditions.