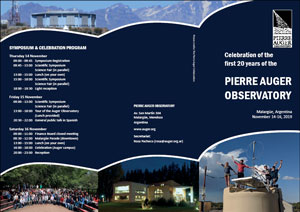 Ralph Engel is senior scientist at the Karlsruhe Institute of Technology (KIT), Germany. His research interests are related to the physics and detection of ultra-high-energy cosmic rays and neutrinos. A central theme of his work is the application of knowledge and methods developed in high energy physics to problems in particle astrophysics. He is an author of several simulation codes commonly applied in cosmic-ray physics and of the text book “Cosmic Rays and Particle Physics”. His recent work focusses on the upgrade of the Auger Observatory, AugerPrime.

Engel received his PhD at the Univ. of Siegen (Germany) in 1997. Before joining the Pierre Auger Collaboration in 2002 he worked at DESY, Hamburg (Germany), and the Bartol Research Institute, Newark (USA). Prior to being elected as spokesperson he has been task leader for hadronic interactions and the surface scintillation detectors of AugerPrime. Engel is the German spokesperson of the newly established Helmholtz International Research School for Astroparticle Physics and Enabling Technologies of KIT and the Universidad Nacional de San Martin (UNSAM), Buenos Aires (Argentina), and currently acting director of the Institute for Astroparticle Physics at KIT.

Antonella Castellina is senior scientist at the National Institute of Astrophysics in Torino, Italy and Associated for Scientific Research to INFN (National Institute of Nuclear Physics). Before studying  particle astrophysics, her research focussed on diffractive physics in forward multi-particle spectrometers and on calorimeters for the study of proton decay (as fellow member of UCLA, Los Angeles, and CERN).

She then studied neutrinos from stellar collapses at the underground laboratories of Mont Blanc and Gran Sasso, and extensive air showers at the EAS-TOP observatory, where she lead the analysis of the data from the hadronic calorimeter. She is author of the monograph "Astrophysics of Galactic Charged Cosmic Rays”, in vol. 5 of "Stellar Systems and Galactic Structures”. In 2001 she joined the Pierre Auger Collaboration, focussing mainly on the study of cosmic ray composition and hadronic interactions and, most recently, on the development of the AugerPrime detectors.