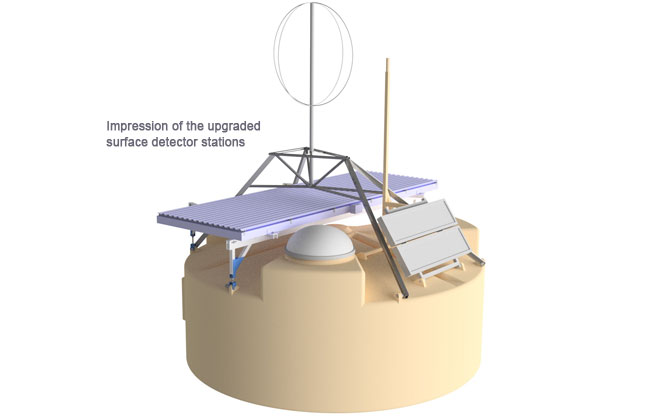 Auger data indicate that the most energetic particles are not only protons but mostly heavy, highly-charged, nuclei. These are deflected by cosmic magnetic fields, which makes it difficult to track back to their origin. The AugerPrime upgrade-endeavour addresses this challenge with dedicated instrumental upgrades. Another ten years of operation is expected to double the data set and to identify the cosmic accelerators. The original cosmic rays will be inferred by getting more details about the mixture of secondary air-shower particles. This will also include the exploration of fundamental particle physics at energies beyond those accessible at terrestrial accelerators, and the observation of new physics phenomena.

The key element of the upgrade will be the installation of a plastic scintillator (SSD) on top of each existing surface detector (SD) station, furthermore enhanced SD electronics with an Upgraded Unified Board, addition of a small photomultiplier to the SD, installation of the underground scintillator muon detector AMIGA and measures to increase the duty cycle of the fluorescence detector. It will provide a complementary measurement of the showers allowing the reconstruction of muons and electromagnetic particles. The surface scintillator detector stations will be deployed over the full 3,000 km2 area of the overall surface detector.

The preliminary Design Report can be found at arxiv:1604.03637.
See the deployment of the first SSD station

In 2018 an ERC Advanced Grant as well as a grant of the Dutch funding agency NWO were provided for the Auger radio upgrade. As a result the radio upgrade will be part of the AugerPrime upgrade as well.

The AugerPrime-Symposium was held at Malargüe, Province of Mendoza (Argentina) in November 2015. Besides tours and presentations of the Pierre Auger Observatory there was the Inauguration of AugerPrime with the signing ceremony of the International Agreement.