On Sep. 15, 2016 six Surface Scintillator Detector (SSD) stations were deployed with a single trip to the engineering array site. 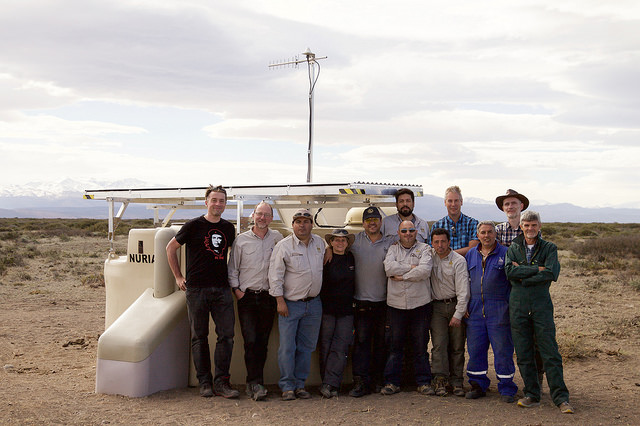 Five more stations are planned to be deployed next week. The photograph shows the first detector set up in the field, which is part of the triplet at the so-called station Generalife.

The upgrade of the Pierre Auger Observatory consists of installing plastic scintillators on top of each existing Surface Detector station together with a new readout electronics (UUB). It will provide a complementary measurement of the showers allowing the reconstruction of muons and electromagnetic particles.

The six detectors in the field are not yet connected to the UUB. A seventh station Didi, located at the campus next to the Assembly Building, has also been equipped with scintillators, but connected to UUB for software debugging. And preliminary results from the upgraded Didi already show first muon signals. Very soon all detectors will be connected to new electronics and will record the first beautiful data. After many years of preparation, this is a true milestone for the Observatory!

It is our pleasure to acknowledge the enthusiastic support of the local staff in Malargüe. In addition to participating in the work of preparing and setting up the detectors they have done great work in preparing the workshop and inventing means of transporting the detectors on a trailer. And it is very rewarding to see how well everything was prepared by a multitude of people at different institutes, so that the deployment team did not encounter any serious problem — thank you very much!

Congratulations to everyone in the field, in the home labs, and to the local staff working with enthusiasm to get the EA working!