In a recent calibration campaign at the Pierre Auger Observatory, the directional and frequency characteristics of the radio stations equipped with logarithmic periodic dipole antennas (LPDAs) have been determined using a remotely piloted octocopter. 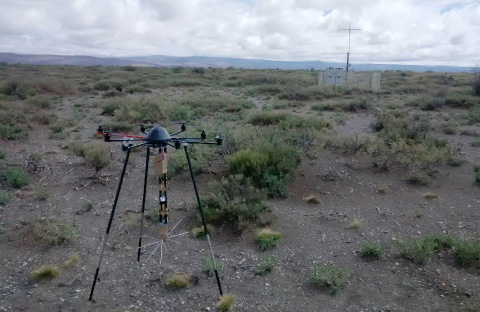 The octocopter in the field

When high energy cosmic rays enter the Earth’s atmosphere, they interact with air molecules producing a cascade of secondary particles which propagate through the atmosphere in a so-called air shower. Due to different emission processes coherent radiation in the radio frequency range is emitted by the air shower which primarily originates from its well-understood electromagnetic part.

The Auger Engineering Radio Array (AERA) is the radio detector of the Pierre Auger Observatory and consists of more than 150 radio stations covering about 17 km2. The radio stations are used to reconstruct the electric field emitted by cosmic particle induced air showers which gives, e.g., a precise measurement of the energy contained in the electromagnetic shower. The accuracy of the reconstructed shower energy is limited by the uncertainty of the absolute antenna calibration such that reduction of the uncertainties is most desirable.

In a recent calibration campaign, the directional and frequency characteristics of the radio stations equipped with logarithmic periodic dipole antennas (LPDAs) have been determined using a remotely piloted octocopter. It was used to place a calibrated source at different positions above the array. The antenna response has been quantified using the formalism of the vector effective length and decomposed in terms of a horizontal and a meridional component. The horizontal component of the LPDA VEL at 55MHz is exemplary shown on the left side of Figure 1. All experimental components involved in the calibration campaign have been quantified with respect to their uncertainties. The horizontal and meridional components are determined with an overall uncertainty of

Figure 1: (left) Horizontal component of the LPDA VEL (red dots) in comparison to the simulation (green curve) as a function of the zenith angle in 5° bins at 55MHz. The gray band describes the global systematic uncertainties whereas the statistical and flight-dependent systematic uncertainties are combined within the red error bars.
(right) Systematic uncertainty of the square root of the energy fluence due to the calibration for all arrival directions taking into account a signal polarization due to the dominant geomagnetic emission process.