On 13 March 2014, Romania was officially accepted as a full member state in the international collaboration "Pierre Auger Observatory". 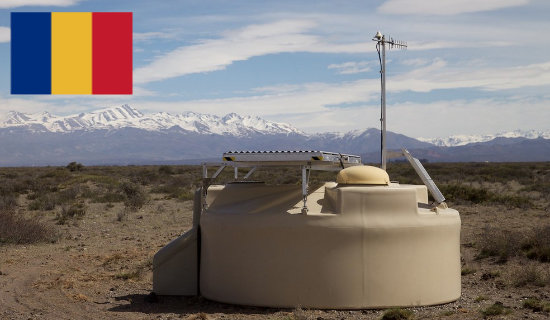 Spread over an area of 3000 km2 in Argentina, Auger is the largest cosmic radiation experiment in the world. This collaboration allows Romanian researchers to contribute to solving the mysteries of ultra-high-energy cosmic rays.

Since 2011, Romania has embraced the status of Auger “associated state” through the sponsorship of the “Karlsruhe Institute of Technology” from Germany. Formally, Romania is represented in the Auger international collaboration by the Horia Hulubei National Institute of Physics and Nuclear Engineering, the Institute of Space Science (ISS), the University of Bucharest and the University Politehnica of Bucharest. By becoming a full member of the Auger collaboration, Romania aligns itself (with voting rights) with the other 17 Auger Member States.

“The Pierre Auger Collaboration welcomes Romania as full member. The competences of the Romanian collaborators will be a great asset for the Collaboration”, says Prof. Dr. Karl-Heinz Kampert, the Pierre Auger Observatory Spokesperson, from University of Wuppertal, Germany.

Discovered about 100 years ago, ultra-high-energy cosmic rays continue to remain a mystery to scientists, even though they continuously bombard the Earth. On entering the terrestrial atmosphere they interact with molecules or particles in the air and produce showers of secondary particles that reach the ground. However, such an event is estimated to happen from once a year up to once a century per square kilometer, which makes the study of ultra-high-energy cosmic rays very complex.

The Pierre Auger Collaboration aims to solve the mystery of the sources of ultra-high-energy cosmic rays by bringing together scientists from across the globe and by using complementary detection techniques, spread out on large areas. Auger combines observations taken with 1660 water tanks, 27 optical telescopes and 160 radio antennas, all of these detectors being located on an area 10 times lager than Bucharest.

"Through nature’s generosity, the Universe can be observed either directly from outer space, or indirectly by looking at cosmic messengers received on land, in air, water, ice or salt mines. The study of astroparticles coming from within our own galaxy, the Milky Way, or of extragalactic particles opens a new window on the observation of phenomena and cosmic bodies located up to thousands of light years away from Earth", says Dr. Paula Gina Isar, ISS institutional representative at the Auger collaboration.

The Institute of Space Science (ISS) from Magurele, Romania, conducts scientific research in areas such as Astroparticle Physics, High Energy Physics, Astrophysics and Cosmology and Space Plasma Physics. It also performs activities related to applied research, design and development of space technologies. ISS has been involved in collaborations and partnerships renowned both nationally and internationally (CERN-ALICE, ANTARES, KM3NeT, Pierre Auger Observatory), in ESA’s space programme through space missions such as Euclid, Planck, Cluster and has collaborated with NASA for the first Romanian experiment on board of the International Space Station.