Getting insights into the measured dipolar anisotropy

The Pierre Auger Collaboration measured a dipolar anisotropy in the arrival-direction distribution of the cosmic rays with energies in excess of 8x1018 eV, finding that the flux is about
6.5% larger than the average in one direction of the sky and it is correspondingly smaller in the opposite direction.

We now studied in more detail this signal by splitting this energy range into several bins to see how the arrival direction distribution depends on the energy (see figure 1).

We find that the dipolar amplitude grows for increasing energies and this result is consistent with the evolution that is expected to take place in astrophysical scenarios in which the anisotropic distribution of the nearby extragalactic sources is responsible for the observed departure from isotropy, as shown in figure 2. 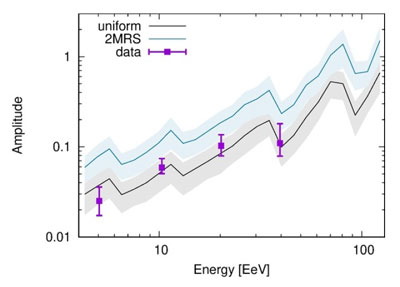 Figure 2: Amplitude of the dipolar modulation as a function of energy. Also shown with color bands are the predictions for scenarios with mixed cosmic-ray composition and extragalactic sources with densities of 10-4 Mpc-3 and distributed uniformly or following the distribution of the galaxies according to the 2MRS catalog.

The direction of the anisotropy points away from the Galactic center direction in all the bins considered above 4x1018 eV, and not far from the outer Galactic spiral arm (see figure 3). 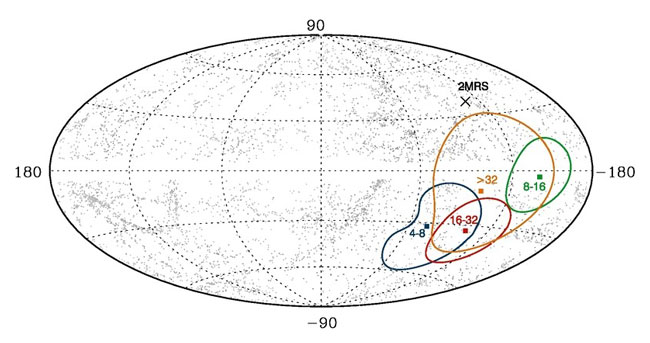 Figure 3: Direction of the reconstructed dipole in Galactic coordinates for the different energy bins. The background dots correspond to the galaxies in the 2MRS catalog with the cross indicating the associated flux-weighted dipole of their distribution.

Figure 4: Map in Galactic coordinates illustrating the effect of the Galactic magnetic field on an extragalactic dipolar distribution. The circles indicate the direction of an extragalactic dipole and the dots (and arrow) the direction that would be reconstructed when it is observed from the Earth for different values of the cosmic ray rigidities (E/Z=32, 16, 8 and 4 EeV). The color code indicates how the dipole amplitude would be reduced by the distorting effects of the Galactic magnetic field.

We also searched for a quadrupolar component in the arrival direction distribution, without finding any significant signals.