Inferences on Mass Composition and Tests of Hadronic Interactions from 0.3 to 100 EeV using the water-Cherenkov Detectors of the Pierre Auger Observatory

We present a new method for probing the hadronic interaction models at ultra-high energy and extracting details about mass composition.

The surface-detector array of the Pierre Auger Observatory covers an area of over 3000 km2. The array contains 1660 water-Cherenkov detectors, 1600 of which are deployed on a hexagonal grid with 1500 m spacing with the remainder on a lattice of 750 m covering 23.5 km2. We refer to these configurations as the 1500 m and 750 m arrays. Using the data from the two arrays of detectors our Collaboration has developed a new method to infer the mass composition of ultra-high-energy cosmic rays over an energy range that extends from 0.3 to 100 EeV. The data sample used in this study is three times larger than the one provided by the fluorescence technique alone. This is possible thanks to the high duty cycle of the water-Cherenkov detectors, which are operational nearly 100% of the time.

This new method characterizes the time profiles of the signals in the water-Cherenkov detectors by the risetime, t1/2, defined as the time taken by the integrated signal to increase from 10% to 50% of its total value. The risetime contains information from both components of the air-showers, the muonic and the electromagnetic ones.

When a large number of risetimes is recorded in an event it is desirable to characterize the whole event with a single observable. In this case, this is done with the Delta method, illustrated in Fig. 1. Following this approach a new observable, ΔS, is defined. ΔS describes the average deviation of risetimes within a particular event from the expected average risetime, in units of the risetime uncertainty. The behaviour of the average risetime is given by the benchmark, a parameterization which describes the risetimes as a function of distance and zenith angle in a narrow energy range.

Fig. 1: Schematic diagram to illustrate the Delta method together with the expression to calculate ΔS.

The observable ΔS, based on risetime measurements, also contains information from both components of the air-showers. For this reason, ΔS can be used to test the validity of the hadronic models. The comparison of ΔS as a function of the energy with the predictions given by the models EPOS-LHC and QGSJetII-04 brings new evidences showing that these two models do not adequately describe the data and that the problem is related to the description of the muonic component of the showers.

In addition, the Delta method enables to infer the depth of shower maximum, Xmax, by calibrating the new observable ΔS with measurements from the fluorescence telescopes for a sample of hybrid events. A strong correlation between Xmax and ΔS is not expected because Xmax is dominated by the electromagnetic component; whereas ΔS depends on a muon/electromagnetic mix, see Fig. 2. The calibration procedure provides a relationship (one for each detector array configuration) to transform each value of ΔS in an estimation of Xmax.

Fig. 2: Correlation of Xmax and ΔS for hybrid data of the two detector array configurations.

The published work is based on data gathered from 1 Jan 2004 to 31 Dec 2014. For the two surface detector configurations, the 750 and 1500 m arrays, there are 27,553 and 54,022 events respectively for which the estimation of Xmax has been possible. Of those, 49 events are in the range beyond 70 EeV, and 517 events above 30 EeV. The sample above 30 EeV is nearly 14 times larger than currently available from fluorescence measurements and extends the covered energy range by half a decade. The results of Xmax provided by the Delta method (shown in Fig. 3) are in good agreement with the previous fluorescence measurements and extend the measurement of Xmax to greater energies than before. 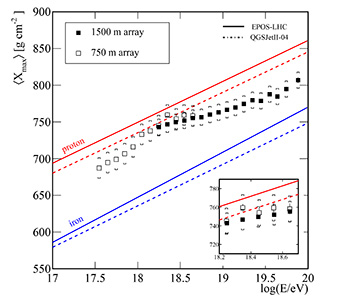 Fig. 3:  Mean values of Xmax obtained with the data of the 750 and 1500 m surface arrays as a function of the energy.
(Inset) Zoom of the energy range where data of both arrays overlap.