The Pierre Auger Collaboration has investigated the constraining power of the cosmic ray spectrum and composition measurements with respect to the properties of the possible sources.

The astrophysical model adopted in the paper is rather simple, featuring only a small number of free parameters. The sources are assumed of extragalactic origin and uniformly distributed. They inject nuclei, accelerated in electromagnetic processes, and therefore with a rigidity (Energy divided by charge) dependent cutoff. These nuclei are propagated through the Universe and the spectrum and composition at the top of the Earth's atmosphere are fitted to experimental data. 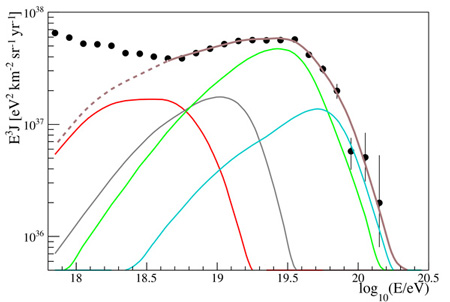 The average and standard deviation of the distribution of the depth where the cosmic ray induced air shower contains the maximum number of particles (Xmax) as obtained for the same model (brown) are shown in Figure 2 compared with experimental data. The dashed lines show the expectations for pure elements. Only the energy range where the brown lines are solid is included in the fit.
A second minimum is also present  at a spectral index around 2, and injection cutoff Ecut ≈ Z × 70 EeV. In both cases the spectrum above the ankle is well reproduced, but composition data are better reproduced in the first minimum.
Uncertainties about physical quantities relevant to UHECR propagation and shower development are found to have a non-negligible impact on the fit results: hadronic models with lower Xmax predictions or positive systematic shifts in Xmax measurements require lower γ and Ecut and result in worse fits, and to a lesser extent smaller photodisintegration cross sections or EBL intensities tend to require lower γ and Ecut  and result in better fits. The systematic uncertainty on the energy scale and the shape of the injection cutoff have comparatively minor impacts on the fit.