Billions of subatomic particles can be created in cosmic-ray induced air showers.

They travel at nearly the speed of light through the atmosphere, and eventually through the surface detector water tanks of the Pierre Auger Observatory, deployed over 3000 km2 of the Argentine pampas. Because of their relativistic speed, when propagating in the water they generate a flash of so-called Cherenkov light, the same phenomenon that causes the bluish glow in a water pool of radioactive material. The light flash is faint and requires specialized electronic light sensors (photomultiplier tubes) that can detect the intensity of the light and its time structure. For example the "risetime" is measured: this is the time that it takes for the light generated to go from 10% to 50% of the total in the overall Cherenkov flash. This time is very short, of the order of a few hundred nanoseconds, thus the need for the specialized photomultiplier sensors. 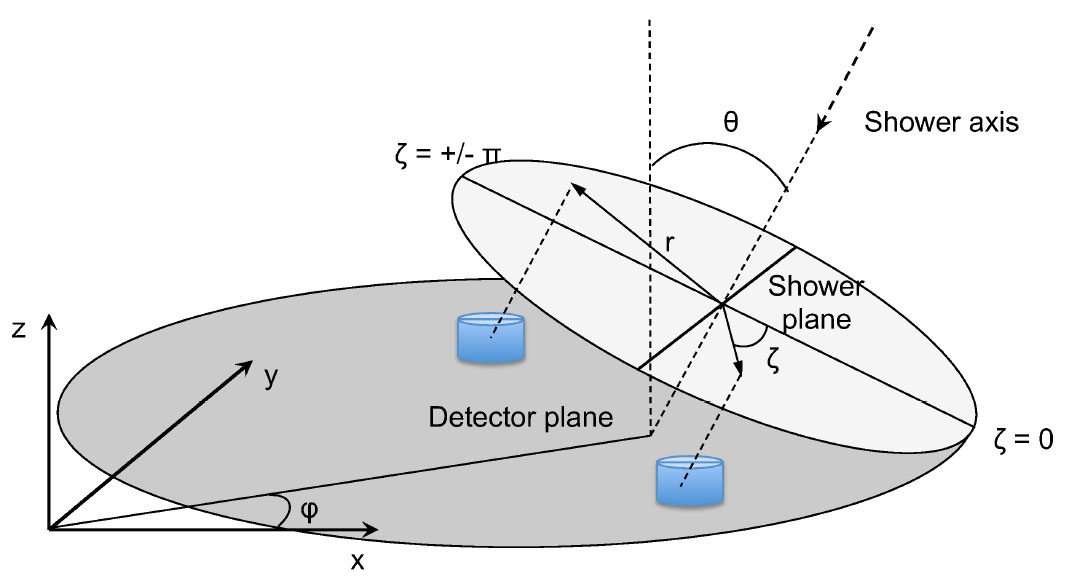 The usefulness of the time structure of the Cherenkov flash comes from the fact that it provides a handle on the evolution of the air shower as it develops through the atmosphere. Indeed such a shower is complex, comprising the full zoo of known subatomic particles (including protons, neutrons, electrons and their antiparticles, gamma rays, but also more exotic objects such as muons, pions, neutrinos, kaons, etc.). The detailed mix of shower particles depends on the energy of the primary cosmic ray at the top of the atmosphere and its nuclear mass, and evolves with the amount of atmosphere traversed. In particular, cosmic rays arriving at Earth at a glancing blow (high zenith angle) yield a shower that must penetrate significantly more atmospheric material before reaching the ground than a particle arriving from the vertical direction (zero zenith angle).

The front face of the air shower propagating through the atmosphere is largely planar, a pancake of particles illustrated in the figure (shower plane). Different tanks of the Auger Observatory sample the particle shower at different stages of its development depending on the location of the detector relative to the shower plane reaching the ground. The tilt of the shower axis from the vertical (the zenith angle theta in the figure) causes an asymmetry in the response of the tanks (in particular the measured risetime) around the particle pancake. At different angles zeta around the shower plane, by the time the pancake reaches any given water tank the shower can be earlier or further along its development, an effect becoming more pronounced with greater shower inclinations from the vertical.

The zenith angle at which the asymmetry around the shower plane is maximized represents a novel observable, that is sensitive to details of the complex shower development history and in particular the mass of the primary cosmic ray. We exploit this feature to extract an average estimated mass of the incoming cosmic rays as a function of energy, by comparing the asymmetry effect measured in the Auger water tanks with the results of complex particle simulations. We find a slow increase in the average cosmic-ray mass at primary energies from 4x1018 eV to 4x1019 eV, i.e., the cosmic rays are progressively more massive atomic nuclei. Such an indirect approach to assessing the primary cosmic-ray mass is necessary, since at the high energies of interest here the cosmic rays are very rare could not be directly observed with an instrument on a balloon or satellite: such are of a size that would require them to operate for thousands of years to observe even a single particle. And so indirect measurements of the cosmic rays are necessary through their air showers, with the advantage that thousands of detectors can be deployed over very large areas, as done with the Auger Observatory. The cosmic-ray mass assessment carried out here, albeit indirect and possible only on statistical samples of events and not for each cosmic ray individually, is nevertheless significant as it informs the possible origins of these extraordinarily energetic objects. For instance, distant active radio galaxies are postulated as their sources, but resolving the details of the physical acceleration and propagation of these rare particles will require accommodating this evidence of a growing nuclear mass at higher energies.