Coordinated by TWAN the contest is open to anyone of any age, anywhere around the world. 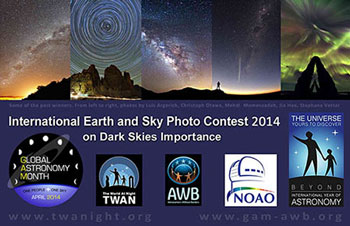 The on-line “Earth and Sky” photo contest is open for submission by any photography enthusiasts of any age from around the world. International projects The World at Night and Global Astronomy Month along with the National Optical Astronomy Observatory are the organizers of the Earth and Sky Photo Contest. The contest was founded by TWAN and Dark Skies Awareness project in 2008 as a regional program. It was expanded to an international effort in 2009 during the International Year of Astronomy. In 2013 participants from about 45 countries submitted a wonderful collection of nightscape images. The contest news was broadcasted by major science news media world-wide and the winning images were widely promoted. With the growing impact of TWAN on both photography and astronomy communities along with the efforts of Astronomers Without Borders (AWB), the organization behind the Global Astronomy Month, the Earth and Sky Photo Contest will have an even larger feedback this year.

Submitted photographs must be created in the "TWAN style" -- showing both the Earth and the sky -- by combining elements of the night sky (e.g., stars, planets, the Moon or celestial events) in the backdrop of a beautiful, historic, or notable location or landmark. This style of photography is called “landscape astrophotography''. This is similar to general "Nightscape Photography" but with more attention to the sky, astronomical perspectives, and celestial phenomena.

The contest theme, “Dark Skies Importance,” has two categories: “Beauty of the Night Sky” and “Against the Lights.” Photos submitted to the contest should aim to address either category: either to impress people on how important and amazing the starry sky is or to impress people on how bad the problem of light pollution has become. Both categories illustrate how light pollution affects our lives. Photographers can submit images to one or both categories. The contest organizers encourage participants to view examples of such photos by the winners in the last few years: the 2013 winners, 2012, 2011, and 2010. Winners of the 5th contest will be announced by mid-May 2014.